Over 100 Years of Quality Flavors

Thanks to many new manufacturing innovations and the development of new products, Weber Flavors has never stopped growing. And that’s why now, as the family looks ahead to its exciting plans for the future, we invite you to take a brief look back on how we got to where we are today.

1902 Edgar A. Weber opens his catalogue and door-to door sales company for flavoring extracts and fragrances inside a 400 sq. ft. facility in Chicago, Illinois. Edgar A. Weber & Company remains at this location for 66 years.

1933 Andrew Plennert Sr. begins working at Weber as part of a family legacy that continues to this day.

1945 Edgar A. Weber passes away. After a 4-year stint in the army, Andrew returns to Weber.

1950 Andrew purchases the company from the Weber family.

1952 George “Dutch” Plennert joins his brother Andrew at the company. 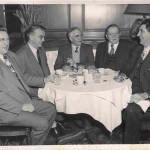 1961 As the family business continues to grow, Joe Plennert joins his two brothers.

1967 After serving in the army, Andrew’s younger son Andrew G. joins the company.

1970 Following his service as a medic in the army, Andrew G.’s twin brother Martin becomes a part of the business. Both sons soon emerge as important leaders in the company.

1974 A custom logo designed by a family friend makes its public debut and remains to this day as a prevalent part of our company’s image. 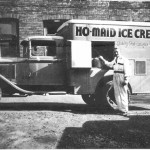 1982 Weber purchases Milwaukee-based Petran® Products Corporation from National Food Ingredient Company, a division of National Can Corporation. Our product line expands to include Pure Vanilla Extracts and other vanilla products as well as blended chocolate powders for the manufacture of Chocolate Milk.

1988 Construction of the new building is completed. 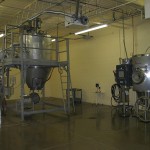 1991 Weber purchases its first Spray Dryer. After several years of R&D and sampling, production begins for our customers in 1995.

1997 The purchase of Wisconsin-based Ho Maid Products expands our product line to include Variegate/Waves, Purees and Bases for the ice cream industry. The size of our facility is increased to 45,000 sq.ft. to accommodate our increased production as well as a walk-in cooler plus expanded laboratories for R&D, Quality Control, and applications.

1997-1998 Weber enlists Chemroy Canada as a broker to move into the Canadian markets.

1998 Martin retires to pursue his dream of manufacturing golf clubs and opening his own pro shop in Lake Geneva, Wisconsin.

1999 Andrew G. Plennert takes sole ownership of the company. Later this year, his son, Andrew M., joins the business. And though he is now pursuing other interests, he was an integral part of the growth of the Spray Dry department.

2003 After graduating from Purdue University, Andrew G.’s daughter, Alysen, joins the company as a receptionist. After working in outside sales and then as the Customer Service Manager, she completed her MBA is now the VP, focusing on project management and business development. Alysen looks forward to continuing the family legacy.

2004 Thanks in part to the continued growth of our Spray Dry business, we answer the need to expand again by purchasing and remodeling a new facility directly behind our main building that now also houses our Sales and R&D departments.

2005 We begin development of our line of Organic products starting with Pure Vanilla Extract.

2011 Because of a growing number of inquiries from new customers and to ensure customers with smaller flavor needs get all the attention they require, we create an Inside Sales department.

Weber purchases a new 67,000 sq.ft. building right next door to our main facility and construct an enclosed passageway between buildings for pedestrian and forklift traffic. The square footage of our facilities now totals more than 100,000. 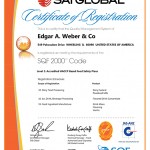 Thanks to the long, hard work of our devoted employees, Weber obtains our SQF level 2 certification. Overseen by the Global Food Safety Initiative, SQF is a globally recognized food management system used to certify companies in the food industry. The only certification of its kind for manufacturers like us, SQF holds companies to the highest industry standards including: rigorous standards for documentation, Hazard Analysis & Critical Control Points (HACCP), food safety, cleanliness of all facilities and employees.